Leading up to The Texas Declaration of Independence 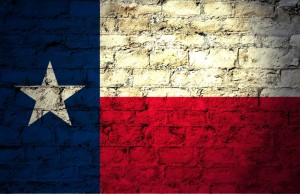 Settlers in Mexican Texas launched the Texas Revolution in October 1835. The main goal of the Revolution was a bit misconstrued; some believed to the goal to be total independence from Mexico, while others wanted the reimplementation of the Mexican Constitution of 1824. A convention was called for March 1836 to settle the issues at hand. The convention was assembled on March 1st with Richard Ellis as president and the delegates selected a committee of five to draft a declaration of independence. Led by George Childress, the committee also included Edward Conrad, James Gaines, Bailey Hardman, and Collin McKinney.

The declaration included the following reasons for the separation:

The declaration proclaimed that the Mexican government “ceased to protect the lives, liberty, and property of the people, from whom its legitimate powers are derived” and criticized about the “arbitrary acts of oppression and tyranny”, which were based on the original writings of John Locke and Thomas Jefferson.

The Texas Declaration also contains many significant statements of American political principles from the United States Declaration of Independence including:

On March 2nd the declaration was approved without any debate.

At the exact location where Texas became Texas, the 179th celebration at the Washington at the Brazos State Historic Site is where the Independence Day events will be taking place.

The two day Texas Independence Day Celebration on Saturday, February 28, 2015 and Sunday, March, 1 2015 from 10:00 am to 5:00 pm, is located on the park grounds of the Washington on the Brazos State Historic Site located approximately 200 miles south of Dallas. The celebration features all sorts of activities to observe the historic events including live music, food, Texas traditional crafts, living history presentations, firing demonstrations, historical encampments, keynote address from Texas Lieutenant Governor Dan Patrick, and other commemorative programs.

Celebrate Right Here With an Authentic Texas Steakhouse in Dallas

If you can’t make it out to Washington on the Brazos to celebrate Texas Independence Day, there is no reason you can’t celebrate it right here in Dallas. Y.O. Ranch Steakhouse is a true Texas style steakhouse in Downtown Dallas that celebrates the Texas heritage all year round.

The Y.O. Ranch Steakhouse claims its true Texas heritage from the Y.O. Ranch, which is an internationally known ranch located in the beautiful Hill Country of the Lone Star State. In the early 1950’s Charles Schreiner III pioneered exotic wildlife ranching at the Y.O. Ranch; he stocked the ranch with game animals from all over the world. Today, the ranch is home to 60 species of exotic wildlife including emus, giraffe, onyx, redneck ostrich, rhea, water buffalo, and zebra.

When you enter the steakhouse you’ll see Texas décor all around. The furniture, pictures, animals, art, and more all come from the Y.O. Ranch. Whether you dine in the main dining room, host or attend a private party in one of the private dining rooms, or enjoy a cocktail and appetizer at the bar, you will be surrounded by Texas heritage and welcomed and served with true Texas hospitality. 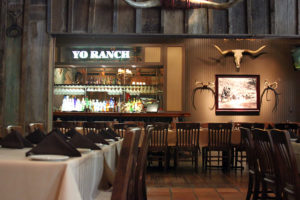 At Y.O. Ranch Steakhouse we proudly offer a large selection of Texas style specialties including: 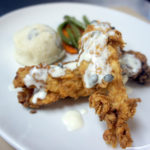 We also have many other famous dishes to enjoy including our Chicken Friend Lobster, Red Chili Rubbed Salmon, and Texas sized cuts of steak like the Porterhouse, Prime Cowboy Bone in Ribeye, and more.

Even on our expansive wine menu you will find Texas local wines from wineries right in here in the Lone Star State. We even have local Texas Whiskey from distilleries in the Dallas area.

Whether you are looking for a true Texas Style steakhouse in Dallas to celebrate Texas Independence Day or just looking for one of the best restaurants in Dallas that offers true Texas hospitality, Y.O. Ranch Steakhouse has it all and we welcome you to celebrate with us this weekend, on the official day-Monday the 2nd, and all year round!