Its the night of November 21st and my first day in Dijon was a success. Let me tell you about dinner last night at Le Laurent. 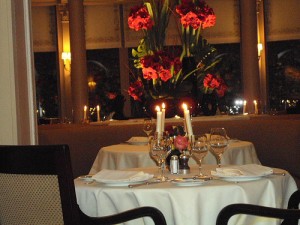 I walked to the restaurant from my hotel which ended up being a nice stroll down Champs de Elysee. When I arrived, I was one of three tables I still cant adjust to eating so late like the locals. When I sit down the cockiest of all sommeliers comes  over and asks what kind of wine I would be starting with. Well you know the drill right? When I told him that I would only be drinking water he stormed off in a major tizzy. It was so awkward that I almost left. Is there some law in France that I wasn’t aware of that says you have to drink their beloved wine with dinner?

So the server asked me what I was going to eat and I said “whatever the chef suggests just make sure foie gras is involved”. The server and chef chose a 5 course meal for 150 euros. Five minutes went by and no amuse bouche had arrived. I guess they thought that the American did not know what an amuse bouche was. So now we are really off to a bad start because they have been rude to me twice before I even got a morsel of food . At this point I forget about trying to have a dining experience and settled for having dinner so my attitude was  BRING ON THE FOOD!

So out comes the first course and it was the most colorful plate of food that I have ever seen. It was a selection of root vegetables that were meticulously placed on a plate. I swear it must have taken one of the army of chefs that you could see in the kitchen  at least 10 minutes to arrange the  roots. I had mixed feelings about this dish. My first impression was that I couldn’t believe that one of the best chefs in the world would send out a plate that had absolutely no seasoning, sauce, or put his touches in any form or fashion on the dish.

On the other hand it was a nice start to a meal. The vegetables had very earthy but clean  flavors that were refreshing on the palate. The textures were also very nice the chefs obviously babysat each root while they were cooking because  they were perfectly cooked. I still am not sure how I felt about this dish. I don’t think it did a very good job of setting the tone for a 150 euro meal. It would have been most impressive as a garnish with a meat entree. Second course comes out this time brought by a different server which worked out perfectly her and I  got along very well. 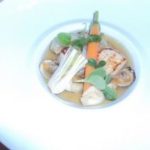 She liked my Texas accent and I liked her personality.  So the dish was a soup with clams, scallops, oyster mushrooms, in a lobster broth that was so silky and refined that it wouldn’t surprise me if it had been reduced for a couple of days. Though this dish also lacked a little something I am sure that this dish was exactly the way the chef meant it to be. I am sure his palate is superior to mine so this bowl of crustacean’s was a total success.

Next arrived the highlight of the meal. It was two globules of goose liver resting on a spiced bread sitting next to two slices of perfectly ripened mango (my favorite fruit) that was seasoned with what appeared to be Thai chili. This mango reminded me of when I lived in Acapulco and ate spicy mango on a stick with some spicy chili powder. The mango was garnished with thinly shaved coconut. All of this sat on a smear of what i think was a balsamic reduction. I hate to keep saying this but this was the best dish I have ever had . 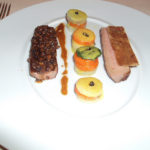 Next came the first disappointment of the evening. It was lamb done two ways. Both of them were loins that were over cooked. I cant imagine that the chef meant them to leave the kitchen that way. I mean they were medium well at best. I almost sent it back but i did not want to make a scene so I ate it.  They used the skin of the lamb and rendered  it until crispy and used that in a sauce on one loin and garnished the other with it. The dish had a lot of potential but fell short by being overdone.

Next arrived the cheese tray. I am officially over this tradition and I have only been here for 3 days. After 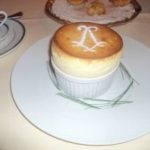 pretending to enjoy my cheese plate they brought a beautiful souffle. This looked very promising but unfortunately did not deliver. It was perfectly cooked but the flavor profiles were strange. The chef used herbs instead of something sweet. It had no sweetness at all but instead tasted of something aromatic like grass.

So overall it was a good experience and the food was beautifully prepared but I could have gotten better food at many restaurants in Dallas.