As a steakhouse in Dallas, we meet so many self-proclaimed steak lovers every day. From the selection of the cut to the preferred doneness of the steak, we are proud to host some of the biggest steak connoisseurs from all over the nation. However, a new documentary called Steak Revolution takes the love of steak to an even higher level.

While we can all agree that steak is tasty, there is so much more to it than just the cut and seasoning. Each piece of steak served at any steakhouse has a history that directly influences its appearance, texture, and taste. Director Franck Ribiere and his favorite butcher, Yves-Marie Le Bourdonnec delve deeper into this background story – wandering through the world with one goal in mind: to find the secret “farm to fork” formula that creates the greatest steak in the world. Their search takes viewers along on their two year journey as they travel through France, Italy, Spain, Sweden, Belguim, UK, USA, Japan, Canada, Argentina, and Brazil to meet with chefs, butchers, farmers, steakhouse owners, food journalists, and meat experts about all of the different variables that influence the quality of beef.

Using his individual taste, Franck judges each piece of meat the he tries according to its texture, taste, aroma, and the overall pleasure he experienced while eating it. What they found was that steak tasted differently in every country. Each country’s steak had a different background story – from the breed of the cow the steak is from, to what they are fed, the type of cut, and cooking methods – all the way down to how much fat is measured in each steak.

What Makes the Best Steak?

Franck and Yves-Marie come to many different conclusions throughout the movie. Ultimately, the meat varied on the taste of the consumer and culture. For example, the quality of steak in the United States is generally lower than that from other parts of the world, as Americans value quantity over quality. In other words, Americans want to get the most meat for their money. On the contrary, steak in Japan is considered a compliment to a main rice dish rather than the center of the meal. Their Kobe steak is fatty, marbled, and is enjoyed in small quantities.

In addition, they found that the marbling on a piece of meat depends on the age, diet, and even the happiness of a cow until the very last moment of its life. Cows that live in stressful situations are shown to have more tenseness in their muscles, resulting in a leaner steak. Happy cows, on the other hand, have tender, fattier meat, producing a much more flavorful steak.

At the end of the two hour documentary, you’ll feel like you really “know” steak, not just love it. You’ll look at every piece of steak you enjoy afterwards with an even deeper admiration and appreciation – understanding the journey that it took to get to your plate as well as what it takes to produce the perfect cut. 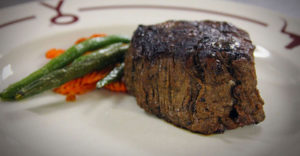 Although most steak lovers are unable to spend two years traveling the world to find the best steak, a delicious steak dinner is always just an online reservation away at YO Ranch Steakhouse. Each of our steaks are hand cut in house, then expertly seasoned, cooked to perfection, and served alongside succulent sides to satisfy every taste and appetite. We invite all steak enthusiasts, including Franck Ribiere and Yves-Marie Le Bourdonnec, to come enjoy what has been declared “one of the nation’s finest steakhouses” by Jim O’Connor of the Food Network.