A special night out for a Texan usually involves the fresh night air, a couple of refreshing drinks of your choice, and a meal at your favorite Dallas steakhouse. Sure, this seems like a normal weekend night for many people, but isn’t it interesting to think of where the tradition of the steakhouse began?

Y.O. Ranch Steakhouse is one of Dallas’ top steak eateries, and we are proud of the heritage that stands behind the juicy cuts of meat that a steakhouse menu serves. Here is a brief history of where the steakhouse came from and why these restaurants have become such an age-old American tradition.

The Origins of the Steakhouse

Sure, Texans have always been cooking their steaks out on the open range for their ranch hands and partners, but did you know that the origins of the Dallas steakhouse don’t even come from Texas? That’s right the steakhouse as we know it comes from two direct ancestors, the beefsteak banquet and the chophouse.

Both of these places of origin for the customer friendly steak were in New York City. This was the origin of the restaurant style solely based on the affluence of the city during its post-civil war 1800s era.

The Origins of Cooking a Steak

Since around the 15th century, people recognized the benefits of eating beef and steaks have been a culinary delight for countries that had enough suitable land to keep grazing animals on. Cattle is the most popular form of steak and some of the countries that have a rich history of beefsteak production include Argentina, Ireland, New Zealand, Australia, the United States, the United Kingdom, and South Africa.

In these countries beef has represented a large portion of export markets and has been a rich agricultural good throughout time. 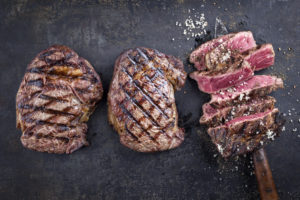 Digging Into the Beefsteak Banquets and the Chophouses

Keep in mind that the origins of the steakhouse were not as welcoming to all members of society. The beefsteak banquets were mainly men-only political events that were held as candidate fundraisers or in the event of a recent political victory.

The name stems from the cuts that were served at these events: sliced beef tenderloin.

Chophouses were restaurants that catered to merchants and store clerks that wanted a hot meal. These steakhouses served not only beefsteaks, but also lamb kidney, bacon, baked potatoes, and ale.

Fortunately, much has changed with regards to the politics that were involved at the beginning of this trend. However, one thing still holds true; meat, potatoes, and a good, hard drink will always be in fashion.

Y.O. Ranch Steakhouse is Perfect for Enjoying the Present Season

Yes, it is fun to reminisce and look back on how the Dallas steakhouse found its original roots in the 1800s, but at Y.O. Ranch Steakhouse, we really enjoy living in the moment with our guests. Whether that be dining or relaxing over a cocktail with friends and family; your comfort is our job.

Call us today to make a reservation and get yourself on the list to take a slice out of our country’s history.