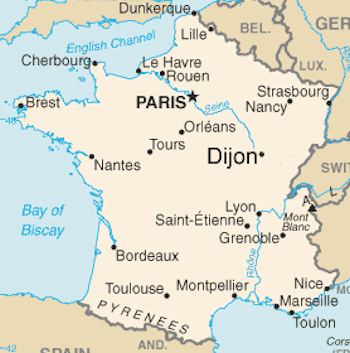 It is November the 21st and I am off to Dijon. Its been a very rough morning so far. I left the hotel in plenty of time to get to Gare De Lyon (the train station) with time to spare. I arrived 30 minutes early even though I was traveling with three suitcases, a hanging garment bag, and a computer bag. I forgot to mention that I had all the luggage for both my wife and I. So Basically I was traveling with make up,dresses,bras, and panties. Historically every time I enter the United States the custom agents  tear my luggage apart. I guess I have a guilty looking face. Well I hope when I return to Dallas that things will be different this time. So anyway the language barrier almost made me miss my train to my job in Dijon. I sat in front of a platform until 5 minutes before my train was supposed to leave and there was still no train.  So I asked and they told I was on the right platform number but wrong building of the station and that I had better  hurry because the trains leave on the minute no matter what. So here I am running with all my luggage looking like an idiot and make the train by the skin of my teeth. The conductor held the door open for me as it was closing  it was like out of a movie.

So I am now traveling 1st class on a really nice train through the Burgundy  countryside and all of the sudden feel very relaxed. However  I did learn a lesson this morning I was over confident. I have lived and worked in three countries including the US but this is the first time that I will be working in a country that I do not understand the language. When I get back perhaps I will study French. So let me fill you in about yesterday in Paris.

So as I mentioned yesterday

I was on the sight seeing bus deciding about lunch. I got off at the Eiffel Tour hoping to go to the top and take pictures but the line was hopelessly long. So I just hung out in the park and took pictures. The tower is truly amazing it put tears in my eyes  for more than one reason. I must have taken 100 pictures from every angle 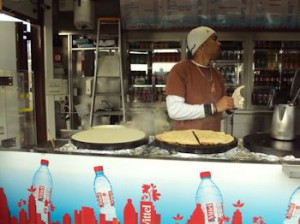 imaginable. I crossed the street to take a picture and noticed a Crepe stand. I had never heard of such until now but it was a stand that sold many different varieties of crepes. I love crepes so I decided to blow off lunch and sit in front of the tower and eat one. I ordered one filled with ham and cheese and topped with a Mornay Sauce. The crepe was very good but not nearly as good as the idea of eating one in a park in front of one of the most recognized and spectacular  structures in the world. That moment could make most peoples  bucket list.

So I am back on the bus

and headed to Notre Dame. Its a gorgeous day theres not a cloud  in the sky and about 60 degrees. I have no idea how many degress that is Celsius and I wish that our country would move to the metric system. I am nervous about my baking when I get to Dijon. My first day there I am cooking about 10 sheet pans of corn bread so that it will be nice and stale for the cornbread dressing on the 24th the day of the gala. We arrive at Notre Dame and I get off and head for the entrance. For some reason I get very emotional when I see old amazing archetcture especially temples and church’s and  this was definitely no exception to the rule. I walked in and immediately  was over whelmed. I sat at the back of the church for about 10 minutes just taking it in. Trying to imagine to myself what all has taken place at this site for the past 900 years.   I get up and walk around through the church and leave after about 15 minutes. I decided to stroll through the Latin Quarter which is the area that Notre Dame is in. Its a great liitle neighborhood but i am trying to see Paris in one day so I hop back on the bus and head to the Louivre. I know that trying to see the Louivre in a couple hours or even one day is not possible so I decide that I am going to see a few pieces such as Venus De Milo and Mona Lisa. This task of course turned out to be imposible. I was in there for three hours and had not even thought about those pieces. I frantically asked the aides where I could find them and headed towards them.

As I approached the Mona Lisa I saw a huge line of people and I had a feeling that I was about to see her. Sure enough I turn the corner and 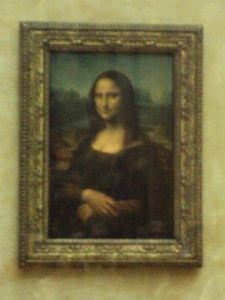 there she is. Unlike all the other masterpiecres you could not get within 20 feet of the painting. I was a little dissapointed but like the crepes it as more about the idea of being there. So I did like the Griswalds from the movie Vacation when they looked at the Grand Canyon and admired it for about 15 seconds bobbing my head and moved on.

I jump on the bus and head to Sacré-Cœur Basilica in Montmarte. Along the way the bus stopped at La Madeleine and I was hungry so I got off. I sat down at a sidewalk cafe and order a cappuccino and a Tarte Tatin . All of these sidewalk cafes are so crammed full of people and everyone smokes and throws their butts on the sidewalk. People here are so different and I love the attitude. I sat and people watched on this extremely busy street and watched the French way of life while savoring the best cappuccino and Tarte Tatin I have ever had. I am no stranger to the Tarte Tatin as I have made thousands of them at Saint Emillon. I made one at lunch and one at dinner 6 days a week for 3 years. Unfortunatley the ones I made were not nearly as good as this one.  I got my check and was shocked that the pie and coffee was 15 Euros which is about 20 dollars. I didnt care in fact I enjoyed paying for the most expensive pie and coffee I had ever seen  because it was worth it. Thinking back when I was a kid making the pies and sitting in front of La Madeleine people watching was priceless.

I jump back on the bus and continue my Montmarte mission. The bus drives through Pigalle the red light district  where the Moulin Rouge is located.  The bus lets off at the bottom of a hill and I walk up a street that is lined with bars,cafes, and street vendors. This stop is shaping up to be my favorite one so far and the battery on my camera went dead. When you get to the top of the hill there is a spectacular view of Paris and is said to be the highest point in Paris. There is a really old church Sacré-Cœur that is really cool. For a true flavor of Paris descend down the hill on the back side of the church and this will take you through a neighborhood that is very artsy and dripping with  coolness. OMG in the old days you would have to drag me out of this neighborhood. One of my favorite things to do back in the days was when I really liked a vacation spot I would accidentally on purpose  miss my airplane home. Well on this occasion Dijon would have never seen me. So anyone ever planning a trip to Paris plan a full day in Montmarte. I was in  a hurry to get to the hotel  because I was going to ask the concierge to suggest the nicest Michelin star restaurant he can get me in for my last night in Paris. So I take the subway back and go to the concierge desk and start negotiating. An hour later he calls upstairs and informs me that he found a two star Michelin restaurant walking distance from the hotel. The restaurant he chose was Laurent. A three star Michelin. Let me just tell you that there are only 50 three stars in the world and I was about to dine in one.